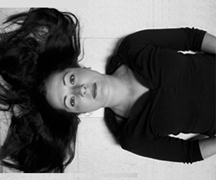 Erica Rebollar was born in Madrid, began studies at Washington School of Ballet, and completed her MFA in choreography at UCLA. With the founding of RebollarDance in 2003, Erica Rebollar created a modern dance collaborative where multi-genre artists can make innovative work. RebollarDance examines dichotomies and fragmentations of physical behavior that explore boundaries of performance, using bodies, light and sound as conceptual canvasses to evoke authentic, highly charged experiences for both dancers and audience.

RebollarDance is the current awardee of Fairfax County Art Council’s Operating Support Grant and Dance Place’s Space Grant for her recent creation of “Sacred Profane”, to be toured through the National Performance Network. Erica is currently Visiting Artist in the Department of Dance at UMBC and the 2016 awardee of the prestigious Pola Nirenska Award for Outstanding Contributions to Dance.