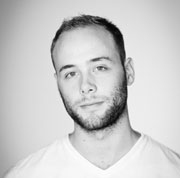 Sam Horning is a dancer, educator, and dance maker currently based in Washington, DC. As an artist, his choreographic mind has been heavily influenced by the quotidian and poetic spectrums of dance. He values everyday experiences and archival knowledge, mining both for the inspiration, materials, and compositional structures that become the textures of his dancing. Sam relies on efficiency and chance encounters as a means of movement invention. His work is produced from detailed improvisation techniques and is rooted by the information the body can receive from the floor.

Sam is a recent graduate from Wayne State University with a BFA in dance. During his undergrad career, he had the immense pleasure of studying with Biba Bell, Nicholas Leichter, Meg Paul, Jeffrey Rebudal, Addison O’Day, Ariel Osterweis, Sean Hoskins, and other WSU faculty whom have greatly influenced his artistic choices. While on academic and talent scholarship, Sam was the personal assistant to the Associate Professor and Area Head–Dance, Jeffrey Rebudal and was simultaneously the President of WSU Dance Workshop in his senior year. Sam was featured in The Michigan Opera Theatre’s production of The Merry Widow in spring of 2015 and was also a member of Artlab J dance in Detroit. He has had the honor of performing in several traditional and non-traditional spaces, but most notably at the The Kennedy Center, The Joyce, The Detroit Music Hall, the Detroit Opera House, the Detroit Symphony Orchestra, Dequindre Cut in Detroit, and Sogang University in Seoul, South Korea. Sam currently dances for Bowen McCauley Dance and is the Facilities Coordinator at Dance Exchange.